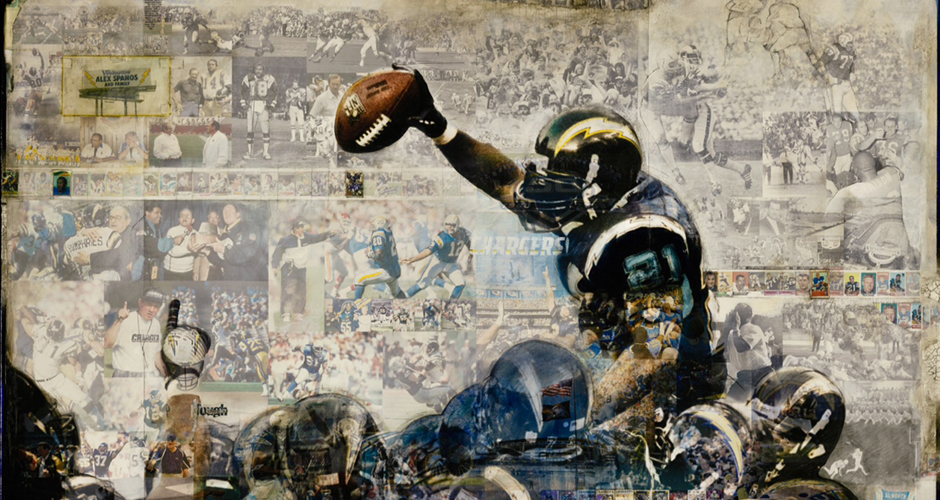 Pro Player Insider’s, Theresa Villano, was able to catch up the with Dustin Slade and Carol W. Slade (C.W), of the Slade Project, to explore more about their family collaboration and a piece the Spanos family commissioned to represent the history of the Chargers organization dating back to 1961.

Pro Player Insiders: How did The Slade Project come about?

Carol W. Slade: Our family consists of artists so discussions on art, architecture and design have always been a common occurrence at the Slade home. Although our approach and ideas on each subject may vary we often turn to each other for an honest response to our individual work. A few years ago, my youngest son Dustin created an architectural collage of himself using photographs his wife had taken. It sat around untouched for a while and he then followed it up with a second for his wife. I suggested that he allow me to further express the story through color and mixed media techniques. So that’s how it began. We spent a week in the studio, transferring the imagery to canvas; ripping, shredding and applying paint and soon the first piece was born. It is a natural evolution of our shared passion for art and family. Pulling together our unique styles has enabled us to expand our vision triggering unexpected and exciting results.

PPI: Can you share more about the commissioning process?

Dustin Slade: The depth of this artwork comes from the materials our collectors provide us. Once we receive their photos, writings, memorabilia and any other important items, I select the foundation image and began to construct the digital collage. We then transfer the imagery to a canvas for the mixed media portion. At this point, our family comes together in the studio to integrate a variety of the collectors preferred colors, materials and techniques, further expressing the theme and story expressed through the photographic collage.

Time-lapse video of the Slade family in the studio creating the Chargers artwork.

PPI: What made you specialize in working with professional sports teams and athletes?

DS: Many of them appreciate fine art and have a fascinating story to share so we felt that it was a great fit. Some even prefer to keep their content related to their personal lives rather than sports career.

PPI: Tell us a little about your recent piece commissioned by the Spanos family. How did this relationship and project come about? I’m assuming the Slade family was born and bred Charger fans?

DS: We are definitely a family of football fans and I became attached to the Chargers when I moved to San Diego 12 years ago. We reached out to the Spanos family to introduce them to our artwork and we were honored by their response. Not only did they identify with it, but they also wanted to display the finished piece in a very special place within their executive conference room, directly behind President Dean Spanos’ seat (which is directly in line with the video camera that he uses for his NFL conference calls). We hope that it is just the first of many pieces we do for the Chargers and other NFL franchises.

PPI: Our insider team hasn’t seen a piece of artwork of this magnitude. It looks like you used actual pictures, cards, and memorabilia? Where did you get these? How did you choose the pictures and memorabilia?

DS: The first step of the commission is a consultation with the collector to identify what theme or story they want to share. We gave the Chargers some ideas of items that could be included within the piece, and they provided us with photos, signed football cards, game used jerseys, footballs, and more. Our team sat down with team C.E.O A.G. Spanos to identify key accomplishments within the history of the franchise to make certain they were included. There are over 300 photographs, some of which are Alex Spanos’ favorite photos; others are legendary players such as Dan Fouts, Lance Alworth. Each one of the football cards that are within the artwork is of a player that is in the team’s ring of honor and has the player’s signature on it. In addition to the other retired numbers, we also included the #55 decal the players are wearing on their helmets this year in tribute of Junior Seau.

PPI: Why did you use that particular front picture of the players holding up #21?

DS: That photograph was captured when LaDanian Tomlinson scored his 29th touchdown to break the single season touchdown record, but to me it also speaks of unity and teamwork.

PPI: Is there a particular team or player you want to work with next?

DS: Our goal is to work with every franchise in the NFL. We would love to share the story of a historic organization like the Green Bay Packers using photos from the Vince Lombardi era leading up to their more recent Super Bowl victory; or a piece for a player that has accomplished something amazing in the league. For instance, Drew Brees broke the NFL record recently for most consecutive games with a touchdown pass. Forty-eight touchdown passes in forty-eight games and I don’t think he’s done yet. He’s a guy that has accomplished some wonderful things both on and off the field.

PPI: Are there any football related paintings you are currently working on that NFL players and fans can look forward to?

CW: This project is very new but we have a number of collectors that are gathering materials in order for us to start their pieces. In addition to reaching out to various teams and players we are also talking with a top ranked college football team.

Stay tuned is right. Pro Player Insiders plans to feature more of the Slade Projects and more of their NFL artwork . This will include a follow up interview on a piece they completed for former player Luis Castillo.

Don’t miss a minute of the action! Subscribe to the Pro Player Insiders newsletter for exclusive content, VIP invites and special access delivered right to your inbox.